The Protest Memory Network held a practioner-led symposium on Commemorating Women’s Suffrage at King’s College London, 4 July 2018, which was free and open to the public.

This was organised by Red Chidgey, of King’s College London and D-M Withers from the University of Sussex. The event formed part of the 2018 centennary of the Representation of the People Act, which allowed the first UK women – and working class men – the right to vote.

This post collects together some of the live tweets from the #protestmem hashtag on what it means to remember a social movement such as the Votes for Women campaign.

The event received an early and important challenge from Prof. Heidi Safia Mirza on how commemorating white women’s suffrage in Britain and dominant narratives of equality invisibilizes racism of empire which made such moments possible for white women.

Mari Takayanagi discussed setting up the Voice & Voice exhibition space within Parliament to commemorate the suffrage movement and to connect to gender politics today.

Beverley Cook explained how the suffragette collection at the Museum of London grew out of a donation from militant suffragettes. She discussed Keeping Alive the Suffragette Spirit, an exhibition that assembled artefacts from the militant campaign, including items produced while in Holloway Prison, and artworks from female prisoners today.

Helen Antrobus introduced Represent! at the People’s History Musuem. This exhibition used co-curation with activist groups such as Sisters Uncut as a way to link the Votes for Women campaign with contemporary politics.

Susan Croft challenged ‘big narratives’ of the Votes for Women campaign and its iconic leaders through working with local archives. 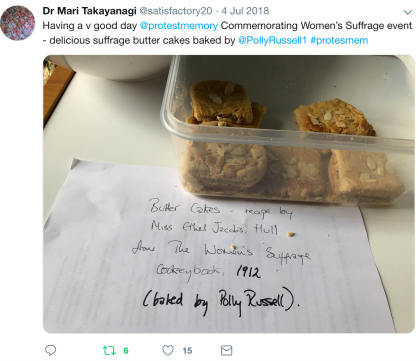 With talks by Heidi Safia Mirza (author of Dismantling Race in Higher Education: Racism, whiteness and decolonising the academy), Sumita Mukherjee (author of Indian Suffragettes: Female Identities and Transnational Networks) and Caroline Bressey (author of Empire, Race and the Politics of Anti-Caste), chaired by D-M Withers.

Heidi Safia Mirza discussed the epistemic violence of exclusion of women of colour from feminist history and suffrage narratives. She proposed that in the absence of imagery of black women from the archive, new ways of telling stories must be created.

Sumita Mukherjee emphasised the need to decolonise and decentralise histories of the women’s suffrage movement. She discussed how we need to talk more about Empire and suffrage, and how many in the suffrage movement were elitist and imperialist. Sumita concluded by highlighting the need to place both historic and contemporary feminist movements in Britain and the west in their wider global contexts.

Caroline Bressey pointed out that it is national and biographic histories of suffrage movements that tend to get written, when these were internationally connected movements and individuals. Caroline also discussed the contemporary memory politics of the film Suffragette, including the politics of accountability – or lack of – around the ‘I’d rather be a rebel than a slave’ publicity stunt. 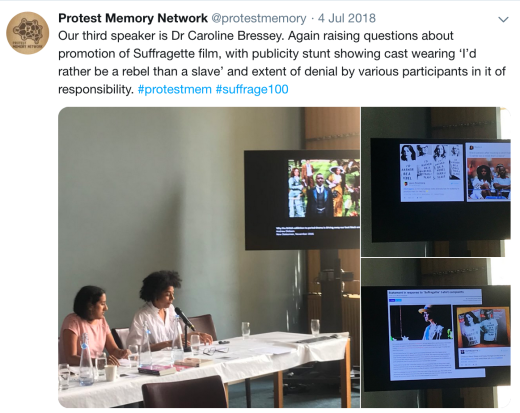 The Q&A raised   questions such as: are such erasures the result of white guilt, or white ignorance? Does public history struggle to deal with difficult aspects of protest past?

This panel explored a number of civic-driven commemoration projects.

Tamsin Dillon described the process of erecting the monument to suffragist leader Millicent Fawcett in Parliament Square, from petition to 3-d printing.

Andrew Simcock shared the experience of fundraising a statue to militant suffrage leader Emmeline Pankhurst in Manchester, following a public vote on notable women historical figures. This prompted an interesting challenge from the audience about how popular voting will produce ‘populist’ figures to commemorate. Emmeline Pankhurst is probably the best known figure within the Votes for Women campaign, and also a defender of British imperialism.

Sarah Jackson introduced the commemorative activities of the East End Women’s Museum which strives to connect to the local, working-class histories of the area, including replicating the pay-what-you-can cafes from the women’s suffrage campaigns. 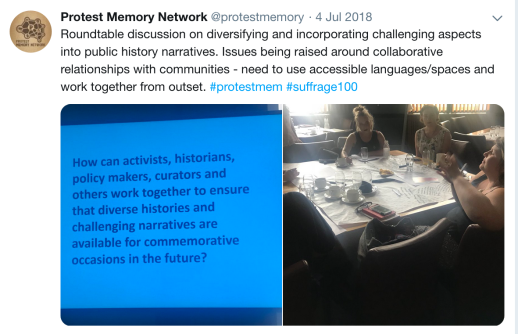